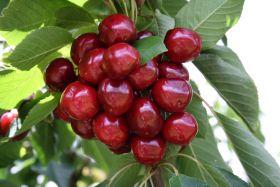 Tasmania is on track for another strong cherry export season with increasing production set to provide more value for exporters.

According to a report from the Examiner, Peter Cornish, chief executive of Fruit Growers Tasmania, said at the start of 2021 that weather permitting, growers were looking at a good season.

“Early cherries have been good for the domestic market, but for the vast majority of this year's crop, about 60 per cent of it goes to export and comes on a little bit later," Cornish said.

"The bulk of our cherries get harvested from now to the middle of February, but overall, things look pretty good for the crop."

Cornish said exporters from the Australian state would continue to target a range of markets this season and would be aided by new airfreight services.

"Our other important markets were in Thailand and Singapore and about 17 or 18 different countries where our cherries, in particular, were exported.

"It's certainly helped by the new (faster) air freight service running out of Hobart into Hong Kong, then Taiwan, China, and Japan."

Tasmanian growers have increased plantings over recent years which are now coming into maturity. Cornish said this is set to boost production in this season and over the coming seasons.