Fresh produce industry stalwart recognised for dedication, service and commitment to the sector and his community 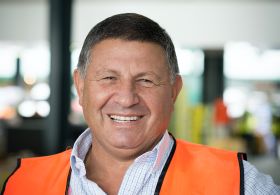 Tony Joseph has become a Member of the Order of Australia (General Division).

Joseph was recognised on the Australia Day 2021 Honours List for his dedication, service and commitment to the fresh produce industry, extending over 50 years.

His career began in the Brisbane Markets in the late 1960s, where he worked for a number of businesses before establishing Alfred E Chave, a leading wholesaler that continues to be run by members of the Joseph family.

While involved with his own business interests, Joseph’s passion for the fresh produce sector has extended to industry organisations at both state and national level.

This includes 34 years as a director of the Queensland Chamber of Fruit and Vegetable Industries Co-operative (Brismark), including terms as president, vice-president, treasurer and deputy chairman.

Joseph was involved with Brismark through the Queensland government’s sale of the Brisbane Markets and the successful industry-based bid for the markets in 2001/02, which resulted in the establishment of Brisbane Markets Limited (BML).

Joseph has been chairman of BML since 2002, overseeing the transition of ownership from being a state-owned entity to being a commercially operated, unlisted public company.

“Tony is extremely well known and respected throughout the fresh produce industry,” said BML chief executive, Andrew Young. “His guidance and leadership has been a hallmark of his involvement in all facets of the sector.”

Joseph has also served as a director of the Brisbane Markets Trust and the Australian Chamber of Fruit and Vegetable Industries.

Beyond the fresh produce industry, Joseph has been a director of the Brisbane Broncos Football Club and Brisbane Broncos Leagues Club. He is a passionate supporter of Queensland Rugby League and the Surf Life Saving Foundation.

“I am honoured to receive this award, which pays tribute to the collective efforts of everyone I have worked with over the years,” Joseph explained. “I love Brisbane Markets and the fresh produce industry, being able to serve both has been a privilege of which I am immensely proud.”