Apples damaged during the boxing day hailstorm in Nelson, New Zealand to be marketed as imperfect 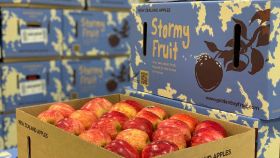 Speaking to Stuff NZ, GBF chief executive Heath Wilkins said the company had been mulling over the concept for several years, and last year’s hailstorm significantly increased the amount of fruit that would fall into the new product line.

He said a significant portion of the fruit was severely damaged by the hail and had to be immediately picked and discarded, but there was another portion of fruit that just received small indentations on the surface.

Wilkins highlighted the quality of the fruit remained very high, and that it was cosmetically where it didn’t meet class 1 standards for exports.

“While the fruit is cosmetically different, it tastes the same with the same nutritional qualities – it's still a great New Zealand apple,” Wilkins told Stuff NZ.

“It doesn't just have to be hail damage, it could be branch rub, sunburn, a small bruise – just fruit with slightly higher cosmetic issues.”

It’s reported that up until now, New Zealand apple and pear growers had been throwing the cosmetically damaged fruit away, sending it to be juiced or selling it for stock food for little to no return.

Wilkins said the new brand would also help improve the sustainability around food waste and educate consumers that “imperfect” fruit could still be high-quality.

Most of the fruit (about 200-300 containers worth) will be exported overseas, with the first batch headed to Taiwan over the weekend. According to the report, demand for this type of fruit is much higher overseas, however Wilkins said they would sell it domestically if interest grew.

“In a normal year [this] would be just a small part of what we do, but it definitely will continue to be a part of our brand,” explained Wilkins.

“We needed to move quickly to get it going – we pulled it together in about five weeks. It’s been a pretty fast-moving project but one we are very proud of.”

According to provisional figures from the Insurance Council of New Zealand, the hailstorm caused about NZ$44m worth of damage across the region with more than 1,000 insurance claims.

There were 432 claims related to crop damage that accounted for about NZ$20m, closely followed by 125 commercial/business claims totalling NZ$18.7m.

“It was horrendous at the time of the hailstorm and has been horrendous since then. We've just been working hard to salvage something out of this year's crop,” noted Wilkins.

“We hope that out of this hailstorm there might be a small ray of sunshine – that Stormy Fruit is something we can look back on in a few years as something good to come out of it.”