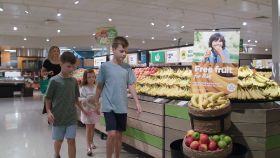 In a new milestone, Woolworths has announced it has given out more than 100m pieces of fruit as part of its Free Fruit For Kids programme.

Launched in 2015, the programme provides children who enter stores with free in season fruit such as apples, bananas, and pears and mandarins.

Paul Turner, Woolworths’ general manager of fruit and vegetables, said the national programme is aimed at helping get more fruit into kids’ diets.

“Providing Australian kids with more than 100m pieces of free fruit is one of our largest community initiatives. It not only makes fresh fruit easily accessible for kids across Australia but is helping build a healthier future for our country,” said Turner.

“We want to say thank you to our customers, especially parents, for embracing the initiative, but also our store teams and farmers for making sure those Free Fruit for Kids baskets are full of great Australian produce for kids to enjoy.”

All of the fruit given away is from local suppliers, such Mackay Bananas and Alcock Bananas in Queensland and Montague in Victoria

“As a family-owned, Aussie business, we’re all about taking positive steps to ensure kids build a love for fruit,” said Tony Alcock of Alcock Bananas.

“There’s nothing more exciting than knowing our bananas have brought tasty nutrition to so many kids over the last five years through Woolworths Free Fruit for Kids programme.”