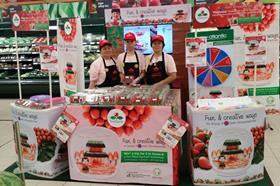 Korean strawberry promotions in Malaysia, a growing export market for the country

The Australian government will analyse the risks of importing fresh strawberries from South Korea, with a draft report to be published mid-2016.

Stakeholder comments will then be taken into account during a 60-day consultation period, after which the final report will be published.

Australia has imported New Zealand strawberries from August to December, and US strawberries from January to June for the past 20 years, according to Australia’s Department of Agriculture and Water Resource, though the import volume has been relatively small.

Indeed, less than 30 tonnes per year are imported from Zealand and, apart from 3 tonnes in 2013, there has been no imports of more than 50 tonnes in any year from the US since 2010, explained Wayne Prowse, principal and senior analyst at Fresh Intelligence Consulting.

“Arguably, since the demand for import strawberries by Australia is very low from two major suppliers as we have a very good year round supply from domestic production, it is unlikely that the situation will be any different from South Korea,” Prowse added.

Korea’s peak strawberry production period is January to March, with 97 per cent of production in glasshouses. In 2015, Korea exported 3,300 tonnes of strawberries from November to April, mostly to Hong Kong and Singapore, with export growth averaging 13 per cent per year over the last five years, Prowse said.

With an expectedly small volume of Korean strawberries that may enter the market under import protocols, the benefits for the Australian industry could prove beneficial for Australia’s trade relations.

According to an announcement from Australia’s Department of Agriculture and Water Resource, Korea advised the Australian government in September 2014 that market access tor fresh strawberries was its highest priority request.

“Australian growers should continue to produce high-quality strawberries to meet domestic consumer needs and not be concerned about a small volume of South Korean strawberries entering the Australian market, providing, of course, all the appropriate protocols are in place to address phytosanitary concerns,” Prowse said.

“It is good for our relationship with Korea in a period of accelerated fresh produce exports of citrus, grapes and cherries to their country with the new free trade agreement in place.”

'We made an election commitment to examine the import risk analysis (IRA) process and we heard loud and clear of the desire for better consultation and transparency in the IRA process. That's what this new position is all about,” Barnaby Joyce,minister for agriculture and water resources, said in a government release. 'The biosecurity liaison officer will come from my department and be responsible for ensuring there are open channels of communication with domestic stakeholders.

'This approach is going to be tested during the process to determine the biosecurity risks associated with importing fresh strawberries from Korea, with the aim being better transparency throughout the process and ensuring my department has all available scientific information that is relevant to this analysis.'