Chilean fruits on the move in China 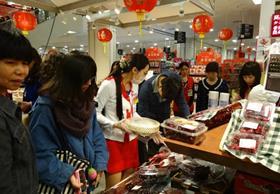 Some of the disruptions caused by COVID-19 in China may be starting to ease with Asoex reporting an increased movement of its fruit in the country.

In a statement released on 19 February, the export association said it had observed increased sales of cherries in recent days, a trend replicated among its other fruits including table grapes, plums and nectarines.

Ronald Bown, president of Asoex, said this trend was occurring in both primary and secondary markets in China.

“In recent days there has been a greater movement of Chilean fruit in secondary markets in China such as Changsha, Zhengzhou, Chengdu, Chongqing, among others,” Brown said.

“This is contributing to the sales recorded in traditional wholesale markets such as Shanghai and Guangzhou, which have reduced their stocks of cherries and other fruits.”

Brown said this represented a 24 per cent increase in daily sales form from recent days and there were currently 1,478 containers still available for sale (564 containers of cherries, 448 nectarines, 192 blueberries, 179 plums, 55 avocados and 40 of table grapes).

Asoex expects to sell its remaining containers of cherries over the course of the next week.