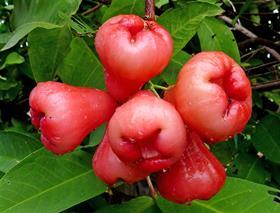 Thai wax apples, Sri Lankan bananas and South Korean grapes have just clinched access to the Chinese market, but one leading figure in the import trade says it is too early to tell how they will perform in the market.

China’s Department of Supervision on Animal and Plant Quarantine, part of the General Administration of Quality Supervision, Inspection and Quarantine (AQSIQ), confirmed in a statement on Tuesday that all three items had been granted access subject to compliance with phytosanitary protocols. It also announced that Chinese lychees had gained access to South Korea under a similar agreement.

Kurt Huang, general manager Shanghai Oheng Import & Export Co, told Asiafruit that while the new additions would enrich imported fruit offerings for Chinese consumers, their market performance is yet to be seen.

He believed that Thai wax apples and South Korean grapes would be appealing to curious consumers, but that trade volumes were unlikely to be significant. Huang added that Sri Lankan bananas were still largely unknown to the Chinese market, but cautioned that there might be a cost disadvantage compared to banana imports from the Philippines and some other countries.

“We have yet to find out about the quality of Sri Lankan bananas. However, Sri Lanka is not part of ASEAN, it doesn’t have a FTA (with China), and it is not on the list of the least developed countries that can enjoy China’s special zero tariff policy… so there will be a 10 per cent tariff for its bananas,” said Huang.