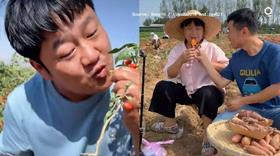 Rural and regional Chinese fruit producers have embraced livesteaming platforms, such as ByteDance’s Douyin – the Chinese version of TikTok – to promote and sell their produce.

Bloomberg Wealth reports Jin Guowei, better known as internet sensation Brother Pomegranate, made Rmb300m (US$46m) in sales in 2020. He once sold Rmb6m worth of pomegranates in 20 minutes.

This method is becoming commonplace among Chinese producers in regional areas. Farmers and agricultural vendors can sell goods directly to urban consumers via interactive livestreams and bite-sized videos. Revenues generated by rural content creators on Douyin have grown 15-fold year-on-year, the company reported.

Guo Chengcheng has 2.5m followers on Douyin and interacts with them live from her family fields while harvesting. Viewers can tap the screen to make a purchase. Bloomberg Wealth reports her video clips spotlight everything from mini pumpkins to wild peaches, many planted by fellow villagers.

She previously sold through Tencent Holdings merchant programme on WeChat, making about a hundred orders a day. Now she takes as many as 50,000 orders per livestream — earning at least Rmb9m per month in sales.

But perhaps the most promising aspect of this latest trend is the demographics of its users. Guo and Brother Pomegranate are part of a counterflow of migrants heading back to the countryside after decades of exodus to the cities. Douyin said 54 per cent of its rural influencers are ‘fanxiang qingnian,’ or returning youth.

That shift was augmented by the pandemic, which forced more than 23m migrant workers to stay in their hometowns. As the nation’s transportation system ground to a halt, agricultural produce languished in storage. At the same time, consumers, stuck at home, were cooking more than ever. Demand for online fresh groceries soared and social commerce offered small-scale farmers a low-cost way to become entrepreneurs.