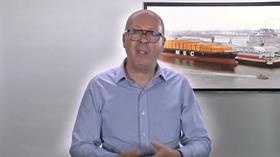 The sixth edition of Cool Logistics Asia began today (18 November), with expert speakers taking an in-depth look at the subject of transport capacity.

The Hall Forum, chaired by Alex von Stempel of Freshwater Logistics and Alan Robertson of Webster Robertson, once again runs in conjunction with Asia Fruit Logistica ON and, much like the main event, is a fully digital experience for the first time.

This year's keynote speaker was André Simha, global chief digital and information officer at Mediterranean Shipping Company (MSC), who focused on what it means to move cargo in the digital age.

In his presentation, Simha extolled the importance of collaboration across the industry as a key factor in the future of refrigerated transport.

“The three main challenges we have, and these are not going away any time soon, are volumes, changing the game, and the fact it’s not just about containers,” he told delegates. “How can we continue to feed the world in a smarter and fairer manner? As an industry we have two options – each of us can go about it on our own, or we can do it together.

“If we do it on our own, we will all invest substantial amount of money in people, and in the end our customers will not reap the benefits,” he continued. “If we do it together, we can share some of the costs and research, and ensure we give our customers a solution on time.”

The challenges facing the industry were “enormous”, Simha confirmed, but he said that the logistics industry was the one that “moved the world”, and therefore should be smart about doing so together.

He acknowledged that it could be difficult for some to invest in digitalisation, but warned that only mass adoption of digital practices throughout the business would make it accessible to everyone.

“It’s not about replacing people with digital technology or competing with other carriers, it’s about meeting future demand as we become 10bn by 2050,” he said. “By 2030, we’re going to have to find a way to ship another 5bn tonnes of cargo.”

Simha said that, having spoken with customers from different sectors, they all said they wanted to be in control of what was being monitored and how exceptions were being dealt with, focusing on reactivity, traceability and an encrypted private communications channel. MSC has therefore launched a series of pilot projects, which are now progressing.

MSC's objective was to prove that a modular, scaleable and open IoT architecture is the one to go for, he commented, allowing connectivity between MSC and other ocean carriers and reefer container operators in a highly flexible way – a unified, digital ecosystem for the benefit of everyone.

“We fundamentally believe that a collaborative effort towards establishing new standards has to become the norm,” he outlined. “This is what we see as a game-changer to lead a more digitally advanced industry as a whole. And that’s a step we need to take together – to challenge traditional business models and drive the entire supply chain towards a new era of connectivity, transparency and efficiency.”

Jonathan Beard of Ernst and Young then took to the virtual stage, to cover the supply and demand of transport capacity and how it has been affected by this year’s Covid-19 pandemic.

“It’s fair to say that as the impact of Covid-19 has endured and as countries have gone into second and third waves, the international forecasting bodies have generally become more pessimistic,” he outlined. “The International Monetary Fund (IMF) was in April projecting a global economic contraction of 3 per cent, in July it revised that to 4.9 per cent.'

He pointed to the sharp projected decline in seaborne container trade this year for Covid-19 and any potential recovery, while also highlighting a slower rate of growth in containerisation. 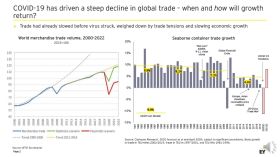 The impact on carriers has been a notable one, Beard said, given that at the start of the year there was a great deal of concern about the financial health, sustainability and capacity of the carriers to weather the storm.

“If you looked over the previous ten years, the industry struggled to deliver a sustainable performance in terms of financial metrics, whether you looked at return on capital or average EBIT margin,” he explained. “Perhaps surprisingly, in the first two quarter of the year, the lines have posted a healthy performance, underpinned by several factors – significantly lower operational costs due to low bunker prices, and a better job of managing capacity.”

As a result, Forbes’ recent analysis of the top ten shipping lines showed that, if you had invested in major shipping stocks in March this year, you’d be looking at an 85 per cent increase in value, with the biggest lines adding US$23bn of market value since that period.

“What has been the impact of Covid-19 on the structure of the industry?” Beard asked. “It’s probably too early to tell, but over the last five to six years we’ve seen a traditionally fragmented industry become more consolidated.”