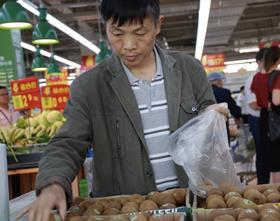 Container jam, shortage looms
The impact of China’s coronavirus (Covid-19) shutdown on global supply chains has been all over the news – whether it is mobile phones, car parts or toys. Perishable food supply chains have felt the full force, including fresh produce. Chinese ports such as Shanghai and Tianjin have been congested with reefer containers that cannot be discharged. That’s forced shipments to be diverted to other ports in the region such as Hong Kong. Fruit imports from Chile, one of China’s leading supply origins, were caught up in the mayhem, particularly cherries (see below), and agriculture officials in the Latin American country have warned of a potential global container shortage in the coming months (March/April) if containers cannot be repositioned. The port congestion was already building up before the Coronavirus studdown due to the African swine flu epidemic, which swept through Chinese pig farms over the past year, forcing the country to import vast volumes of pork and funnelling reefer containers into China.

Offline to online
With travel restrictions and large-scale quarantine imposed across China, people have been spending a lot of time at home indoors. Shopping habits have shifted accordingly. Foot traffic to physical stores has radically thinned out and people have been consuming a lot more of everything – including fresh produce – online. JD.com has reported a surge in sales of online groceries, while Alibaba has reported the basket size at its Freshippo and Taoxianda banners has increased significantly as a result of consumer migration to online purchasing of fresh food and groceries.

New sales channels for growers
With road closures and transport restrictions making it difficult for Chinese farmers to get their produce to market, both JD.com and Alibaba have been working to prioritise fresh produce on their channels and expedite deliveries. JD has launched the ‘green channel’ to help growers sell through the JD app. Alibaba has opened an alternative platform to sell fruit and vegetables through its Rural Support Programme. Alibaba has opened up its Tabao Live platform to growers for free, and ‘livestreaming’ from orchards has become a popular tool for selling fruits and vegetables that would otherwise go to waste. One Foodie Livestream channel connects growers with the channel’s 41m followers. Alibaba said the channel had sold 15,000 tonnes of fresh produce in the first three days of live streaming.

Fruit donations in the front-line
Fruit retailers and suppliers have moved to donate fruit to those directly affected by coronavirus in China and those in the front-line to treat patients. JD.com has collaborated with leading berry brand Driscoll’s, major China apple supplier Tianshui Huaniu Apples Group, and Soho, donating blueberries, raspberries and apples to staff at over ten hospitals in Wuhan. Pagoda, Zespri and the Chilean Fresh Fruit Exporters Association (Asoex) have also made donations to the hospitals and medical staff treating those affected by the virus.

Disrupting domestic fruits
Chinese-grown fruits and imports of tropical fruits from South-East Asia have suffered more than imports sourced from outside Asia. That’s because February is typically a “low-month” for temperate fruit imports, and because local and regional products rely on land logistics. Logistical hurdles have not presented the only headaches for China’s domestic fruit operations, however. On the production end, large scale picking and packing of fruit has been a major challenge, with each region and product affected differently in terms of supply, according to VP of leading Chinese distributor and fruit store chain Pagoda, Jiao Yue. “Take apples, for instance: sorting and packing requires workers, but due to quarantine measures imposed by local government authorities, many workers have not been able to return to work from their home region after Chinese New Year.” The closure of some wholesale markets also impacted sales.

Chilean cherries take hit
For China’s fruit import trade, the primary impacts have been lack of access or movement due to log-jammed wharfs and warehouses, as well as lower sales and lower prices. Some 20,000 tonnes of Chilean cherries arriving after Chinese Year got stuck in ports and are waiting to be sold. The fruit has begun to move again as wholesale markets reopen. The 20,000 tonnes represent only the final 10 per cent of a whopping 220,000 tonnes of cherries shipped by Chile to China in 2019/20, up 30 per cent on the previous campaign, according to analysis of China customs data by Fresh Intelligence Consulting. But the financial impact is still substantial. Earlier this month, Chilean industry officials forecast the lost revenue at US$70-80m for cherries – US$100m if other fruits are added in – but these estimates could turn out to be conservative. Stonefruit and grapes from both Chile and Australia also look to be impacted due to the timing of their seasons, which tend to peak between January/February and April/May. Ditto Egyptian and US citrus.

Much at stake
The citrus export industries in South Africa and Australia, whose campaigns crank up in May, are nervously watching the situation in China, hopeful that things return to some kind of normality, and weighing their options in case they don’t. China is the second largest importer of oranges and grapefruit from South Africa, and this vast market accounts for around 30-40 per cent of Australia’s citrus exports. It’s a similar situation for New Zealand’s apple and kiwifruit industries although their levels of exposure are not so high.

Time to diversify?
Growers who have staked so much on sales to China might now begin to reassess their options and look to spread their risk in future. One of the short-term challenges is there are no markets out there with the capacity to consume anywhere near the volumes that China does at the prices it pays. Last year, China imported 200,000 tonnes of temperate fruit per month between March and May, according to analysis from Fresh Intelligence Consulting. That does not include intra-Asia trade (such as bananas and tropical fruits from South-East Asia), which would take the total imports to 1.7m tonnes for the three-month period. To redirect even 25 per cent (around 50,000 tonnes) of this monthly temperate fruit import volume into other markets looks unviable, since most other markets in the region such as Vietnam, Thailand, Korea and Japan appear to be buying as much as they can. Another short-term challenge stems from the unique quarantine requirements of other markets, which often prevents swift diversion of shipments.

Price volatility
The fruit trade within the Asia region (i.e. intra-Asia) has also been significantly impacted, not least as China is a major supplier of temperate fruits such as apples, pears and grapes to neighbouring South-East Asian countries, and a major importer of tropical fruits from the region. Tridge, a new market intelligence hub for the global food industry, reported significant price changes to fresh produce items caused by the virus between its outbreak in early January and the middle of February. Wholesale prices of Thailand’s red-flesh dragon fruit, which has a short shelf-life and is completely dependent on the Chinese market, dropped by almost 85 per cent after exports to China stopped. Meanwhile, in the Indonesian market, which relies on China for 90 per cent of its garlic imports, the garlic price rose 24 per cent as importers scrabbled to find alternative sources such as Spain and Argentina.

Consumption opportunity
Despite some anecdotal reports of a drop in discretionary purchasing of fresh produce in China since the outbreak, coronavirus also represents a significant opportunity for fresh fruit and vegetable marketers. Not only do consumers still need to eat, they are also looking for foods that are perceived to boost their health and immunity. An expert team assembled by China’s National Health Commission has been advising people that Vitamin C from consuming fruit and vegetables can boost immunity. Sales of products with high Vitamin C content such as citrus and kiwifruit boomed during the Sars crisis back in 2003. The size of the China market today dwarfs what it was in 2003, so the opportunity should be much bigger. Producers of fresh produce and high-quality food can look forward to increased demand. Chinse consumers were already displaying greater concern over the provenance, safety and integrity of foods before the coronavirus outbreak. Their scrutiny is only set to increase from here. That signals more opportunities for fresh produce brands that can provide quality and traceability assurances.

This round-up features in the March edition of Asiafruit Magazine. To order your copy, email subscriptions@fruitnet.com