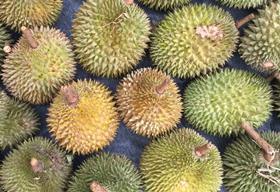 Durian has become an increasingly popular fruit across Asia and efforts are underway to develop the untapped Japanese market.

According to a report from the South China Morning Post, former Japanese foreign minister Taro Kono, has taken up the position of honorary chairman of the Japan Durian Promotion Association and the cause of growing demand for durian in Japan.

Kono developed an appetite for the fruit while living in Singapore and has tried to promote the fruit to others in Japan.

“When I was in the cabinet, I was not permitted to take up a position in an association such as this, but after I left the cabinet last year I was able to join,” Kono said.

“But even before that, I had a durian party in my office and invited all my team to come and try the fruit. Most of them had never tried durian before, but once they had tasted it they were converted.”

As part of the Japan Durian Promotion Association Kono plans to help increase demand among Japanese consumers, increase imports and even develop production in Japan. He said there was at least one company currently working on a commercial crop in Okinawa prefecture.

“The temperatures there (Okinawa) are warm enough to grow durians, although they might require greenhouses for part of the year, but growing them here in Japan will make them cheaper and easier to obtain for Japanese people,” Kono said.

“And Okinawa is very close to Taiwan and China, which could be good export markets.”

Kunio Shinohara, chairman of the Association and chief executive of Rising Sun Traders, said the durian market was currently very small but noted the potential for growth.

“At the moment, it is unusual to find a durian in a Japanese supermarket or even a specialist fruit shop,” said Shinohara.

“We anticipate that in five years, demand will be four times what it is at present.”