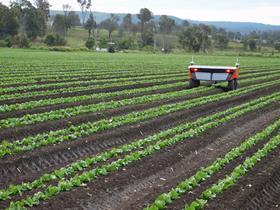 A robotic prototype developed by Australian researchers could hold the key to limiting the risks caused by pests and foreign bodies found in fresh produce.

During trials conducted in Queensland this week, the robot, named RIPPA (Robot for Intelligent Perception and Precision Application), was able to collect data using sensors that mapped an area of a crop, in the process detecting weeds and highlighting foreign objects such as stones, glass or metal.

Salah Sukkarieh, director of innovation and research at the University of Sydney’s Australian Centre for Field Robotics, said this data can also be used to estimate yield and fertilise crops.

“RIPPA was developed six months ago and for the first time will be trialled outside of a site in New South Wales,” he said.  “At Gatton, the robot will experience new soil types and new crops for the first time.”

Sukkarieh said the next step is to build systems that can remove weeds and foreign objects.

Horticulture Innovation Australia (HIA), the organisation that commissioned RIPPA using industry funds and co-contributions from the Australian government, said food safety is a huge priority for growers and the whole supply chain.

“RIPPA gives us an insight into a future not too far away where growers can have increased assurance that no foreign matter has slipped through the cracks,” HIA research and development lead Anthony Kachenko said.

“Currently there is only so much that can be detected with the human eye, and the results can be devastating. It’s also great to be watching the capacity of this farmbot steadily increase. At the moment it can estimate yield, spray weeds and fertiliser, and it can run up to 21 hours straight.”

The 250kg solar-powered robot spent three hours moving up and down vegetable growing rows, during which time it conveyed extensive data live to the laptop of University of Sydney researchers.