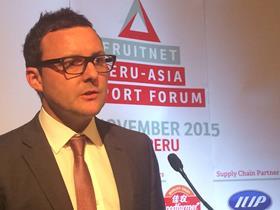 Peruvian exporters were provided with an in-depth analysis of some of Asia’s most promising emerging markets at a unique event organised by Asiafruit Magazine in conjunction with AGAP and PromPeru.

Delegates at the Fruitnet Peru-Asia Export Forum heard how the meteoric rise in Peru’s fresh produce exports will mean an increased reliance on the Asian market in the coming years. Between 2000 and 2014, Peruvian exports of fresh fruits and vegetables climbed from US$105m to US$1.9bn and by 2020 they are expected to double, surpassing US$3.8bn.

While Peru’s main focus in Asia so far has been the Chinese market, the aim of the forum was to shine a spotlight on opportunities elsewhere in the region. A buyer’s mission made up of leading importers from Thailand, South Korea, Malaysia, India and the UAE shared their unique insight into their respective markets and were on hand to meet with growers and exporters individually during the two-day event.

Setting the scene for the forum, Wayne Prowse of Fresh Intelligence Consulting explained that Asia’s fresh produce import market had grown significantly in the past 15 years, with the fastest growth coming from Southern Hemisphere supply countries. The number of affluent households in China and elsewhere is set to rise rapidly in the coming decade, and this will bring an increase in per capita consumption of imported fruit, Prowse said. 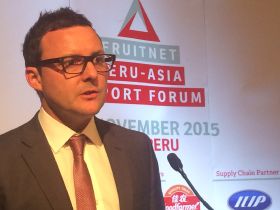 Highlighting the three-fold increase in China’s fresh fruit imports during the last decade, Asiafruit editor John Hey (pictured right) predicted that the country would continue to be the standout growth opportunity in Asia in spite of the recent economic slowdown, with much of this growth set to come from tier-2 and tier-3 cities.

Nevertheless, he pointed out that Peru had the potential to boost its presence in a number of other markets such as India, whose economic growth now rivals that of China, as well as Thailand which he described as one of the best paying markets for high value items, and South Korea, where new products such as cherries, mangoes and pomegranates are becoming increasingly popular.

Describing last year’s poor Red Globe season in China as a wake up call for Peru, Hey noted that this was a clear signal that the country needed to diversify both its varieties and markets. This has already stated to happen, he said, with Peru now exporting 30 types of table grape and much of the focus in new production areas on seedless varieties.

Hey said the surge in avocado and blueberry volumes anticipated in the coming years made it essential for Peru to find new markets for these products in Asia and elsewhere.

Hey praised the government’s record in negotiating free trade agreements, and said an abundance of land and water, relatively low labour costs and favourable production window were among the country’s biggest strengths. But he warned that Peru still has important logistical hurdles to overcome in Asia and pointed out that as a relatively new entrant to the market, the country has yet to establish a solid national identity as a safe and reliable supplier. 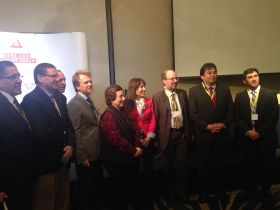 Enrique Camet of AGAP described how new irrigation projects are set to deliver over 200,000ha of new production in the coming years, raising the question of what products growers should focus on. He said a number of alternatives were already being trialled, including kiwifruit, cherries, stonefruit and almonds.