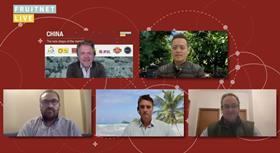 “We’ve seen it happen in other markets before and it’s had a positive impact. It gets consumers buying year-round, helping drive sales when our fruit is in market,'Carvajal said.