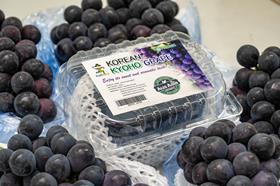 The value of Korean table grape exports from January to April 2021 increased 49.5 per centyear-on-year, continuing a trend that saw record levels of exports in 2020.

According to Korea’s Ministry of Agriculture, Food and Rural Affairs, Korea exported 482 tonnes of grapes valued at US$7.2m during the first four months of this year, compared to the 314 tonnes worth US$4.8m exported over the same period in 2020.

This recent growth comes after a record 2020 for Korean table grape exporters who shipped 1,972 tonnes worth US$30.7m, a year-on-year increase in value of 34.7 per cent.

The Ministry said support for the improvement of grape quality and improvement of pre-cooling and storage methods helped overcome challenges including typhoons and a long wet season.

In particular, improved storage methods have allowed exporters to extend the storage period of Shine Muscat grapes - which account for 88 per cent of grape exports – from three to five months.

This allowed exporters to ship until March outside of the main export period of November to January. According to the Ministry, exporters were able to increase their average unit price by around 30 per cent in March as a result.

The Ministry said last of the long-term storage grapes (800kg) were exported to Vietnam in March to an excellent consumer response, with the shipment sold out on the day of sale.

Vietnam is one of the largest importers of Korean Shine Muscat grapes along with China. Exports to both of these key markets grew by over 30 per cent year-on-year in 2020. The Ministry said the increasing purchasing power and the increasing popularity of Korean products had helped consumption.

The increase in exports and improvement in storage has also helped relieve some pressure on Korea’s domestic grape market following a sharp increase in production. Korea’s Shine Muscat production area has grown from 1,867ha in 2019 to 3,579ha in 2021, a 91 per cent increase.