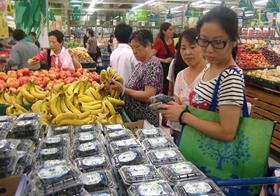 Production of Chinese bananas has taken off over the past year, and is now so high that even with the major shortfall of supplies from the Philippines the domestic market is still facing oversupply.

The Chinese market has felt little direct impact from the shortage of Philippine bananas caused by the Typhoon Bopha devastation so far, according to China-based traders, because the shortfall has coincided with a boom in local production.

“We felt nothing at all of the shortage caused by Typhoon Bopha,” Simon Zhang of northern China-based banana ripener and trader Pan-Pacific Trading Co told Asiafruit. “It happened in the peak season of bananas from our Guangxi Province with those from Yunnnan on the heel.”

Banana production in China has boomed in the past 12 months, and Zhang said growth in Guangxi in particular has been “jaw-dropping”.

“A conservative guess is that the plantations in Guangxi Province have already well exceeded 100,000ha, and in Yunnan too.” The expansion has been a combination of large companies and smaller growers, and Zhang explained Guangxi has attracted growers because of low Panama disease pressures and comparatively cheap land.

The large volume of locally-grown bananas hitting the market in recent months has made for extremely tough competition for imported fruit. Guangxi’s peak banana season runs from October to January.

“This year the price of local bananas is very low and with too big volume and better quality than last year, so it will be very hard for imported bananas to be sold with a higher price, even if we have strong demand near Chinese New Year,” stated Liu Zijie, general director of major Chinese produce trader Goodfarmer.

While the local banana volume is already keeping prices down this year, with Philippine production likely recovered by this time next year there could be serious pressure on the market.

“The question seems to be what will happen if such a big production next year hits our `domestic` market in just three or four months – the only market for the local bananas – can the market hold?” asked Zhang.