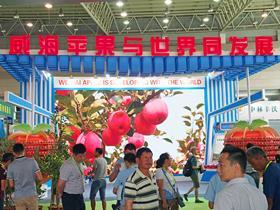 Interpoma China, Interpoma’s new event, gave the global apple industry an opportunity to familiarise themselves with the Chinese market when it took place in Weihai on 28-30 June.

Thomas Mur, director of event organiser Fiera Bolzano, said the the first Interpoma China was an important step in finding out more about the world’s largest apple market and in forging new contacts in the Chinese market.

Focusing on apple production, storage and marketing, the conference and exhibition attracted 2,000 visitors who took in offerings from 70 companies in an exhibition space covering 5,000m2, according to a media release from the organisers. The exhibition space was split evenly between companies from China and the rest of the world, with nine exhibiting nations, including Belgium, Chile, France, Germany, Iceland, Italy, Israel, Korea and the Netherlands.

The international congress ‘China and the Apple in the World’ took place alongside the exhibition, on the mornings of 28-30 June. The conference looked at the state of the apple industry around the world and in China, at different techniques from nurseries to apple packing facilities, and at reducing costs and boosting efficiency.

Three Interpoma China tours were also organised during Interpoma China to give exhibitors and visitors the chance to visit apple-growing areas near Weihai and to understand more about the processes and potential development of apple production in China. The tours showed visitors some modern nurseries and orchards in the Lingang district of Weihai, as well as storage centres and equipment based on traditional Chinese apple-growing methods.

International exhibitors expressed satisfaction with this first edition of Interpoma China, according to the organisers’ media release. Federico Donega of exhibitor Carraro Tractors said the event was well organised and delivered great value to industry stakeholders who want to contribute to the development of sustainable and efficient agriculture in China and elsewhere in the world.

Chinese companies and local partners have great expectations for the event’s growth. Zhu Danpu of Ying Juyuan Agriculture Sci & Tech said the first Interpoma China event was well organised and delivered significant benefits to the industry. “I am expecting to tie up some good business deals on the back of the event,” he said.