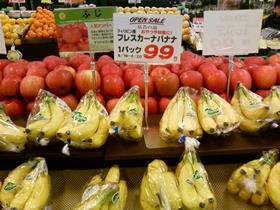 According to data released from Japan's Ministry of Finance and Ministry of Internal Affairs and Communications, Japan imported 134,695 tonnes of fresh fruit in March 2020 a 1.3 per cent increase from March 2019.

Kiwifruit also saw a significant year-on-year increase with a total of 3,258 tonnes in March 2020. This was a 230 per cent increase form March 2019 due to the early arrival of New Zealand kiwifruit.

The data also showed that Japan’s fresh fruit imports, for the most part, had been stable during the first quarter of 2020 (1Q2020) despite the coronavirus (Covid-19) pandemic.

These increases have also been reflected in household consumption of fruits, not only did Japanese consumers purchase an increased amount of fruit in March 2020, they purchased it at a high price, leading to increased expenditure.