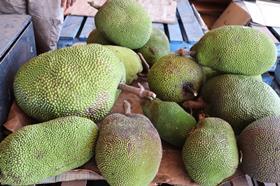 'We'll be measuring a whole lot of attributes, including time from planting to the first crop, annual yield, consumer acceptance and post-harvest shelf life,' explained Piccone.

'We don't really know [what the market demand is], but we do believe that there's probably potential for both the products,' she said.

'Both are used extensively in Asia and other tropical regions. This is a really, really early-stage crop in Australia.”

'It's encouraging to have a large, national company keen to improve the crop and see if the prospects are there for growers,' he said.

'I think Marie Piccone's company are pretty astute growers and marketers of products, so it will be good in terms of having that overlay at looking at this material from a large commercial context.'

'We hope to link in the newer [jackfruit] genetics with the potential products that the Monash University team might be able to develop,' explained Hoult.

'There's a lot of interest in the vegan and vegetarian product development area, and jackfruit is often used as a pulled pork-substitute; it's quite a versatile product.'