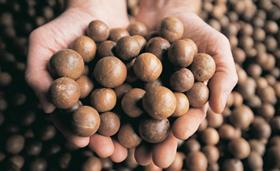 The Marquis Group has completed the 2021 season with Marquis Marketing selling more kernel than it has ever sold before, and Marquis Macadamias receiving more Nut in Shell (NIS) than ever before.

The Australian – South African Marquis Group has ended the 2021 harvest season with kernel sales now more than 10 per cent above 2020 volumes and receiving more NIS across its global operations despite modest crop availability compared to the previous year.

General manager of Marquis Marketing, Charles Cormack, said after a cautious start to the selling year, sales remained strong into September with Marquis now sold out of NIS and popular kernel styles.

“We are in a strong position of being completely sold out in whole kernel, having only very limited availability of half kernel and even being heavily sold in two of the three chips styles,” he said.

“Retail and snack sales have remained strong throughout the pandemic in most markets, but demand for ingredient styles has also now started to show a strong recovery.

“This is being driven by a reopening of food service trade, particularly in the US, but also by renewed interest in new product development using chip styles, which have eased in price.

“Demand for NIS in China has been steady, particularly for the larger sizes and premium quality, and prices have remained steady to slightly rising with additional volumes being contracted late into the selling season. This has helped steady kernel prices in other markets.”

Cormack added the group is now seeing encouraging demand growth in most geographic markets and industry sectors with some of its major customers requesting early delivery and top up quantities to their contracts, indicating that inventory levels are low.

“We are confident that demand will continue to grow strongly through the balance of the year, and by the start of next season carry over stock will be low,” he noted.

“This season saw the first reduction in NIS prices that we have experienced in over a decade, however, the price reduction did not result in any long-term instability as the industry experienced in the past,” he said.

“Processing of the 2021 crop is progressing well with our Australian and South African factories ahead of schedule, taking full advantage of the good quality product supplied from both countries and extracting the most out of our recent factory upgrades.”