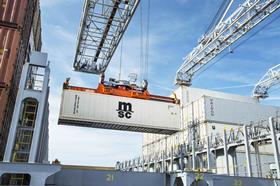 MSC is updating its Asia-Oceania networkin response to strong demand for services linking the regions.

The leading shipping line will reshuffle its Capricorn and Kiwi Express services to enhance its network among the South-East Asia, Australia and New Zealand markets.

Meanwhile, the former Sydney Sweeper service will be replaced by the Panda line, offering a direct connection between China and Australia.