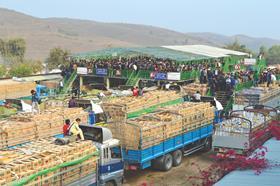 Muse border has remained open, but has experienced long queues

Trade restrictions between Myanmar and China are gradually being lifted, with Global New Light of Myanmar reporting the Lweje and Kampaiti borders have been reopened for export, after they were temporarily closed to avoid the risk of spreading Covid-19.

In the midst of the restrictions, the Muse border remained open for the export of watermelon, muskmelon, mango and plum, however it was inundated with growers wanting to gain access, which reportedly caused lengthy delays, reducing fruit quality and resulting in higher costs overall.

China’s General Administration of Quality Supervision, Inspection, and Quarantine has provided clearance for the export of mangosteen, rambutan and lychee to commence, in addition to existing exports.