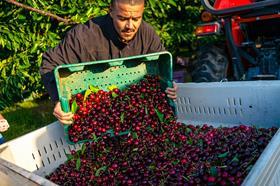 The US Northwest cherry industry has been anticipating a bumper crop for years as growers keep planting more acreage to keep pace with demand.

Entering the 2020 campaign, Northwest cherry growers couldn’t help but worry that another steep decline for China might coincide with that limb-busting cherry crop everyone had been expecting. These concerns have been quickly relegated to secondary consideration by the Covid-19 pandemic and its dramatic repercussions.

However, as it happens the Northwest industry appears to have caught a bit of a break for the coming season. After averaging 24m cartons the previous four years, cherry packouts for 2020 are forecasted at just 20.8m cartons.

With all the uncertainty in the marketplace, less fruit to sell this season is probably timely. Two factors seem to be behind the downturn a hard freeze in mid-March and Little Cherry Disease (LCD).

For the first time in decades, Washington’s cherry acreage is actually shrinking rather than expanding and BJ Thurlby, president of the Northwest Cherry Growers (NWCG) said the effects are already being felt, although they are not devastating.

“Little Cherry Disease has probably taken out around 2m cartons in production this season alone,” says Thurlby. “Add in the frost (damage) and we’re expecting around 20.8m cartons this year.

“While it’s a shorter crop, it’s still not all that small. But a little less fruit is probably a good thing, given all that’s going on in the world at the moment,” he adds.

The season commenced in the first week of June and Thurlby says the first peak in production will land around 23 June while late varieties are expected to peak about 8 July with the harvest set to extend well into August.

“This is also one of the most spread-out crops I’ve ever seen,” says Thurlby, a good thing given the current uncertainty in the marketplace.

Fortunately, there also seems to be some certainly emerging around the availability of airfreight, a concern that was amplified in the height of the Covid-19 pandemic.

“Our Asia-Pacific business depends on the availability of air transport,” admits Thurlby. “But we understand that both China Eastern Airlines and Korea Airlines are organizing regular cargo carries to Shanghai and Seoul; China Eastern will also have direct service to Taiwan as well. We hope to see more passenger airlines coming on-line over the next several weeks, however.”

“Airlift to the major markets such China-Hong Kong, Korea and Japan should be adequate with the cargo carriers,” says Reinholt. “It’s the South-East Asian markets that could be a challenge, as they are typically served by passenger jets and there still aren’t a lot of them flying yet. Australia is a concern due to the strength of the US dollar.”