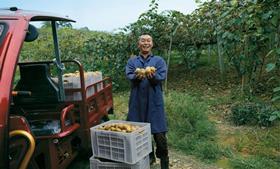 Pinduoduo has partnered with China Post with the aim of establishing new agricultural production bases to increase the fresh produce available on the e-commerce platform.

According to a report from KrASIA, as part of the partnership the state-owned postal service said it will build 150 agricultural production bases within three years.

The companies had already worked together as early as 2016 with local branches of China Post selling produce on Pinduoduo. This new partnership is set to further enhance the strategic cooperation between the pair.

“This collaboration means that even the most remote areas can tap onto the combined resources of the postal service and Pinduoduo to increase market access for farmers, cut down delivery times and widen the choices for consumers,” a Pinduoduo spokesperson told KrASIA.

These programmes also encouraged involvement in the packing, transporting and promotion of fruit with live broadcasts being used to sell agricultural products online. The partnership will facilitate similar development at these new agricultural production bases.