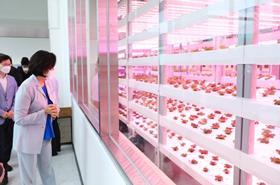 Korean leafy green producer Farm 8 is bringing its vertical farms to the subways of Korea as part of its new approach to urban farming.

According to a BBC report, Farm 8 is hoping to expand its Metro Farm concept to three more Seoul metro stations in 2020 after a promising start from its first farm in Sangdo station.

Installed in September 2019, the Metro Farm uses hydroponic growing trays and automated technology to control the growing environment and produce 30kg of vegetables a day. This produce is then used in an adjacent café for salads, smoothies and other products.

The development of this type of ‘smart farming’ is also supported by the Korean government.

“In order to elevate smart farms, expansion in investment, the establishment of automation equipment and a foray into the ‘untact’ (no-contact) market needs to take place,” said Park. “The ministry will actively help smart farms gain investment by taking measures, such as creating a ‘Smart Korea’ fund.”

Farm 8’s Pyeongtaek facility features a 2,000m2 vertical farm, which produces 1.2 tonnes of vegetables daily. The company said this level of production is equivalent to that of a 100,000m2 greenhouse.