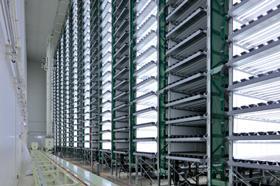 The most significant feature of Techno Farm Narita is the increased efficiency in the use of land. This has been achieved by increasing the number of cultivation racks levels to 28, double that of Techno Farm Keihanna.

Spread said it plans to build on the know-how accumulated through the operation of Techno Farm Keihanna to deliver increasingly sustainable food production.