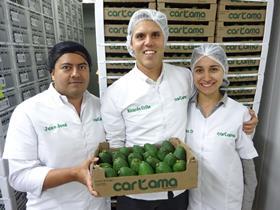 With the exponential growth in avocados continuing to sweep across the world, production is often left scrabbling to keep up with the frenzied demand of hungry hipsters and just about everyone else.

Not so in Colombia, where leading grower Cartama has been specialised in the Hass variety for 10 years thanks to the foresight of current chief executive Ricardo Uribe’s father, and plans were carefully laid in preparation for such a boom. “He would come back from Chile and say ‘we need to make a trial. Colombia has a huge future ahead of it with Hass but we need to understand how to grow it’,” explains Uribe, on a tour of Cartama’s packhouse facility in Pereira, central Colombia.

“So we created a 12ha trial in 2000, which lasted nine years. We made lots of mistakes and we capitalised on those to create a technical package that is now our big asset. Colombia can produce all year round at an altitude of between 1,600 and 2,600m. We have a complete window of harvest and that’s very interesting to our customers in the UK,” he adds.

Attracting the attention of fruit import giant Fresca, Cartama UK was formed as a joint venture in 2016, a move that continued Fresca’s strategy of long-term grower partnerships (the company also works with Banafrut in Colombia) and a deliberate shift towards becoming an avocado specialist. For Cartama, Uribe says the JV moved the company closer to full supply chain integration, a process that will be complete with the addition of its own avocado root stock facility and nursery later this year.

“One of the results of the Cartama UK JV is we looked at how to pack our fruit,” says Uribe, who has been in the business for 18 years. “We’ve invested in a new Maf Roda grading machine, due to be shipped from Spain in summer, which will allow us to become more efficient and accurate on the weights of boxes. And we’ve invested in an air con process so the packhouse is now at 18 degrees, meaning the fruit doesn’t experience peaks of temperature before it is stored and chilled at six degrees.”

Logistics was another point of focus – with many of the rural farms located down off-road tracks, transporting fruit to the packhouse could take up to two days, whereas now it is a maximum of 24 hours.

It all adds up to significant ambitions for increased capacity, something that is backed up by an extensive programme of new plantings. Of Cartama’s total 1,250ha, 600 are currently in production, and Uribe says the company is currently “planting one tree every minute”, as well as continuing to buy more land.

The company also works with 30 associate growers and has a new partnership with the country’s largest bank, Bancolombia, to help finance loans to small farms that border its existing growers, and encourage them to switch into avocados. Under this scheme, new growers receive a guaranteed market for fruit, as well as young trees and specialist training, says Uribe, adding that he believes avocados have offered a new route to rural development in Colombia. “We are encouraging growers to switch from coffee to avocados because avocados really are the peace process of this country,” he explains. “It is a business that encourages people to stay on farms. For young people, they see our UK clients coming onto farms and it demonstrates to them that this business has a future.”

In 2017, Cartama UK imported 220 containers to the UK, and Uribe says his ultimate target is 3,000ha producing 3,000 containers a year. It’s a figure that would sound extreme if it wasn’t for such huge forecasted growth – according to Uribe, the UK avocado market is expected to grow from a value of £70 million to £350m by 2021.

Unsurprisingly, it’s not just Cartama and its joint venture partner that have spotted the potential in Colombian Hass production. While the tropical climate may have higher pest pressures, its fertile volcanic soils and high organic matter, frequent rainfall and year-round production means the country is fast becoming a challenger to other key sources such as Mexico and Peru.

Although 85 per cent of business is with the UK, the wider Cartama group also exports to Europe via the Netherlands, and it is looking at opportunities in the newly-opened US and Chinese markets. “We wouldn’t export to any market, but of course China is very interesting. It is a monster, the consumption is going to be huge,” he says. “[Colombia] will be number one or two in Hass exports in the world, I have no doubt about that. Already the Mexicans are looking to invest here.”

With the backing of one of the UK’s biggest importers and the long-term technical expertise in production, Cartama UK has all its hopes pinned on Hass, and looking at the current trends it’s hard to bet against them.

Cartama is the only Colombian avocado grower with a licence to grow new South African variety Meluma Hass, currently being trialled at its new nursery facility. Meluma Hass is described as early maturing, suitable for high-density planting and more productive than original Hass, and is already being grown commercially in both Mexico and Peru.