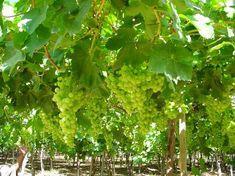 “Marketing is never a problem as demand outstrips supply,” says Nadia Niazi of Nimos Engineering & Agricultural Development Company. “It is the quality levels of your grapes and fulfilling your part of the contract in terms of dates and quantities that makes you a success or a failure.”

However, strict quality criteria and the need to satisfy customers will put producers under extreme financial stress in the future, says Oscar Salgado, Horticulture Export Improvements Association (HEIA) deputy executive director for agriculture, unless Egyptian exporters can open up new markets and find ways to extend the shelf life of their produce. “New markets offer huge potential, but also increased risk. Extending the shelf life would be a safer option and would add months to the Egyptian market share.

Through co-operation with foreign expertise, HEIA is playing a crucial role in transferring knowledge and organising training for Egyptian producers. Salgado says: “Expanding the Egyptian market can be achieved through introducing more varieties. - Thompson Seedless and Crimson Seedless are good options. Egypt has the potential to export table grapes from early May to late August. But currently, 60 per cent of total exported volumes are sent between weeks 24 and 26 in June, where mainly Sugarone and Flame are being exported. If we can produce high quality and low cost Crimson, we could compete effectively during the late season, from July to October. The same applies to Thompson Seedless, for which the markets are free until August when Greece enters, so Egypt could try to exploit that window between June-August.”

Of the 72,000 feddans (30,000 hectares) of grape fields, only 2,800 feddans (1,200ha) are totally dedicated to the cultivation of Sugraone, Flame Seedless and Thompson Seedless for export. The last three years has seen the introduction of a further 3,120 feddans (1,300ha), now in the growth phase, which should be ready for production by 2006. Future production area growth is expected at an average 720 feddans (300ha) a year.

Egypt’s table grape production has seen a marked improvement with an estimated increase of 40 per cent in volumes in 2004 compared to the previous year, and exports reached 20,000 tonnes, says Niazi. Nimos exports Flame Seedless, Sugraone and Thompson Seedless to retailers in the UK and on the continent. Approximately 12,000t of Sugraone and Flame Seedless passed through the perishables terminal at Cairo Airport, with the remaining exports shipped through sea ports.

“The real problem we faced this year was airfreight,” says Niazi. “There weren’t enough planes to carry our products, so we resorted to sea transport, which takes an average 12 days to reach Europe.” The advantage of sea transportation is cost-effectiveness, although it takes longer and requires imported post-harvest technology and material, which is not readily available to new exporters.

Small exporters must co-ordinate their activities in order to be able to gather the volumes required to fill ship containers, but these can be unreliable, as there are no long-term agreements.

Shipments can be frequently delayed, re-routed or canceled. “To overcome both air and sea cargo problems, some HEIA members have been contemplating the possibility of leasing a ship or a plane to transport our produce,” says Niazi.

Niazi, along with Alaa Diab of Pico Farms, attended the first conference held by International Grape, a UK distributor, which wanted to bring together all its suppliers: “It was a good chance to develop personal contacts, meet other suppliers from around the world, and the rest of our customers in the UK market,” she says.

Commenting on the perspective on Egyptian grapes in the European markets, Niazi says that as far as the supermarket chains are concerned, Egyptian grapes enjoy a good reputation. However, at wholesaler level, a lot of “dumping” of below-quality Egyptian grapes occurs in the UK and the Netherlands, which has led to a sharp fall in prices and reputation of the Egyptian grapes, as well as loosing market share, she says.

“New varieties will have to be market-oriented, resistant to various environmental constraints and robust. But acquiring and breeding new varieties requires the existence of appropriate laws to protect the intellectual property rights of the breeder. To achieve any progress in this domain, Egypt must adjust its laws and join the international intellectual property rights of the breeders, known as UPOV,” says Salgado.

HEIA quality assurance manager Mohamed Korany says: “Grape quality has improved over the years, especially for Sugarone and Thompson Seedless, which has resulted in increased customer demand for these varieties.”

Sugraone was cultivated in greenhouses in Fayoum, Noubaria and on farms along the Cairo-Alexander Desert Road, producing excellent results. Productivity levels were more than 50 per cent better than open-field cultivation, with a 90 per cent export-suitable yield. The greenhouses provided controlled temperature conditions and protected the crop from damage by weather, dust and insects.

With respect to export markets, the EU is Egypt’s main market, and the UK alone receives 50 per cent of total Egyptian grape exports. More than 70 per cent of this is channelled through supermarkets, though it is expected that UK supermarkets will further limit the range of suppliers, buying only from one or two importers directly to ensure better control and produce screening.

Egyptian producers and exporters generally agree that 2004 was a good year for table grape exports, despite freight problems. However, even with considerable co-operation and support from the ministries of foreign trade and agriculture to the industry over the last two-three years, the sector still lacks the necessary support to adequately solve the transportation problems, says HEIA vice chairman, Sherif El-Beltagy. “Unless these problems are solved, our efforts to produce top quality fruit will be in vain, since they do not reach their markets in time.”

Salgado adds: “Cutting down on production costs would be essential to overcome the EU tax barrier imposed on all non-EU countries. This requires co-ordination with the government to reduce red tape and import taxes on various production materials. Government support is required also to assist in providing sufficient air and sea cargo spaces for reliable transportation during the export season.”

To better its international competitiveness, Egypt must maximize the use of its competitive advantages - its geographical proximity, relatively low production costs, the abundance of land and water resources, weather. “But first we need to develop labour- training programmes, transportation infrastructure and logistic and cooling technology,” says Salgado.

Generally there is higher demand for grapes, says Korany, and many producers are shifting their main focus to grapes. He says: “This requires increased efforts by HEIA to train new producers on best production and post-harvest techniques, so that they produce high quality grapes and maintain our reputation abroad.

“Last season one grower was asked by his UK customer to conduct a test before shipment, to determine the sugar:acidity ratio of his Sugraone yield. The QA team conducted the test in the field, which gave them a customer-requested report to finalize the deal.”

Additionally, the QA team also provided HEIA members with technical expertise to design, build and operate packhouse facilities. QA supervisors Mohamed El Refaee and Yasser Abdel Moneim formed a team that provided comprehensive design information for three packhouses. The biggest post-harvest centre has a capacity of 15t with an adjacent pre-cooling facility. It was erected in Menya for grower Kareem Samaan, who entered the grapes export business for the first time in 2004.

“HEIA has to support the establishment of pre-cooling facilities in different areas in Egypt, with adjacent packinghouse facilities,” says Korany. “Producers, particularly on new farms, often find no pre-cooling facilities at reachable distances. They are forced to ship their crop without pre-cooling, and the result is that it will not be recognised as first grade. This is particularly true for Upper Egyptian farms, which need to transport crops for packing and pre-cool at distances reaching 1,000km in Ismailia.

”To facilitate post-harvest operations, packing and cooling centres must be built in strategic points around the country, such as in Sadat City, Menya, Nubaria and Luxor,” Korany says, and he thinks a packhouse should be annexed to the perishables terminal at Cairo Airport. HEIA has started negotiations with the government to establish a packhouse and cooling center at Luxor International Airport, which would start operating next season, serving more than 4,000t of various horticulture products.

The QA team is eager to introduce field packing to the Egyptian farms as soon as possible. “This will greatly reduce the time between harvesting and cold storage,” Korany says, “and is the main goal of all post-harvest operations.” Korany also wants to complete the quality-assurance chain. “Just as we care for the grapes in field, packhouse and cooling centres until they arrive for shipment, we should also monitor what happens to the produce on arrival,” says Korany. “Customers sometimes give us unfavourable feedback, although we know we have exported excellent produce. Someone has to accompany each shipment or be based in our main markets, the Netherlands and UK, to oversee the grapes and determine the causes of possible damage so we can avoid them.”

Korany hopes that all Egyptian producers will export under only one or two brand names in the future. “Chile’s success evolved after its producers sold with standardised size, packaging and quality levels. Their products are identifiable, but to locate Egyptian produce, you have to search for cartons with dozens of different sizes and colours” he says.

Responsibility is an important issue to consider in the export business, adds Salgado. “Last season, some irresponsible exporters sent grapes without the adequate sugar levels. This harmed all exporters, since the prices of all Egyptian grapes collapsed. Repairing the damage to the Egyptian grape reputation requires considerable effort.

“We must have a clear plan of all crop-handling stages before the beginning of the season to ensure a top quality crop, and maintain quality throughout all handling processes. The aim is to ensure maximum customer satisfaction and minimum crop loss. This, in turn, will allow for further expansion and diversification of export-oriented crop cultivation.”

HEIA agronomists assist producers to achieve higher quality grape levels by guiding them through production, post harvest and exporting processes. “A key factor for a successful season is careful planning of all activities based on accurate data from previous seasons,” says Salgado.

After the first training phase, for the first time in Upper Egypt, 65 feddans in three farms produced 110 tonnes of Sugraone and Flame Seedless, which were exported to the EU market and Arab countries. Salgado says: “We have been working with 12 new export farms and we expect 90 per cent of them to be exporting next season. Some 350 feddans will be yielding 1,000t of Sugraone Seedless and Flame Seedless.

In Menya, 160 feddans in eight farms produced 335t of Sugraone and Flame Seedless. Approximately half of this area was cultivated with export varieties Superior, Flame and Crimson, but the rest of the area requires considerable upgrading to fit export specifications. Producers who followed the technical instructions, and had a dedicated and trained labour force, had 85 per cent of their crop comply with export specifications. Mohamed El Kasey’s Fana farm was one and El Kasey plans to add 115 feddans of Sugraone next season.

HEIA grapes specialist Sherif Hassan took the responsibility of 85 feddans, cultivated with export grapes for the first time in Wadi El Natrun, Noubaria, Belbeis and the Desert Road. Four out of eight farms exported 200t of Sugraone Seedless and Flame Seedless to the UK, Dutch and Asian markets. “This has been a very successful year, and we learned a lot,” says Hassan. “Next year we will easily export double these quantities.”