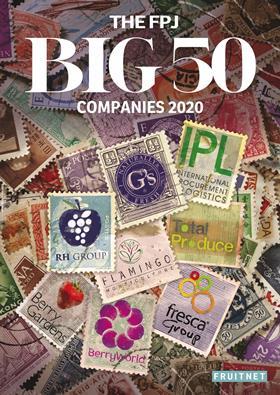 Asda’s buying arm IPL has jumped to the top of FPJ Big 50 Companies 2020 table this year after filing accounts revealing its full size this year.

The company, which sources fresh produce, grocery products, wine, house plants and flowers for Asda, reported a turnover of £694.4m, putting it at the summit.

Once again revenues across the Big 50 Companies continued to rise, but this year the top ten lost some ground on their competitors, with some impressive growth figures from UK fresh produce businesses.

Monaghan Mushrooms topped the biggest risers list this year after leaping 24 places, with the company now up to 17thand a turnover figure of £184.2m.

Direct Produce Supplies were close behind with another stellar year, rising 18 places to be knocking at the door of the top ten.

FPJ editor Michael Barker said: “Analysis of this year’s FPJ Big 50 reveal some interesting trends, one of which is the perhaps surprising fact that six of the top 10 business have actually seen their turnovers decline in the past 12 months.

“That’s a reversal of what’s happening further down the list: only 13 of the following 40 companies have seen a drop in income, with twice as many (26) on the rise and one staying the same.

“It proves it’s tough at the top, where it becomes more of a challenge to grow beyond a certain size without reinventing the formal that has taken you there.”

The challenges during the 2018 season were well-documented, with some of the harshest weather growers have faced in recent memory, battling against the “beast from the east” winter spell, and drought conditions in the summer.

Several berry growers’ turnover struggled as a result of large volumes hitting the market during the heatwave, with prices low as a result.

Nevertheless, 39 companies broke the £100m turnover mark in this year's list, one more than last, showing the fresh produce market is still expanding.

Subscribers of FPJ will receive their copies of the FPJ Big 50 Companies 2019 in the post and via their digital channels. Additional copies are available for £25 each. Contactlucy@fpj.co.ukfor more information.