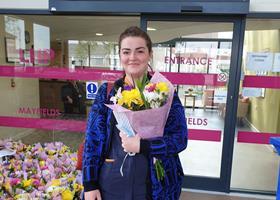 A Dutch flower business with a factory near Spalding has donated 1,000 bouquets to care workers, NHS staff and those in need in Lincolnshire.

Green Partners is described as the largest flower processing company in Europe and supplies thousands of bouquets from its site in South Holland to UK supermarkets every day.

The company responded to Greater Lincolnshire LEP’s appeal for help to #FeedtheNation, and on Thursday 9April, 500 bouquets were delivered to CRG Homecare, which looks after over 400 elderly andvulnerable people in the Boston and Sleaford areas.

A second donation of 500 bouquets will be delivered on Thursday 16April to staff at United Lincolnshire Hospitals NHS Trust.

Operations manager John Berry explained: “Our site manager Johan ten Haken saw the call for workers to keep the food chain flowing, and wanted to bring some happiness to people’s lives at this difficult time and show both vulnerable people and frontline staff that they had not been forgotten.”

Jeanette Kassim, CRG Homecare Boston’s registered branch manager, said: “The flowers look amazing and they have brought many smiles to our service users and employees during these unprecedented and challenging times. We are overwhelmed by this act of kindness and the generosity of Green Partners – it is very much appreciated by everyone at CRG Homecare.”