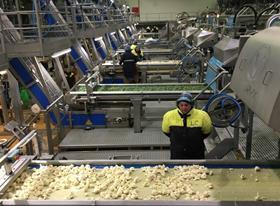 Multinational fresh produce supplier Greenyard says the sudden bankruptcy of one of its suppliers will have no effect on the business.

The Belgian-based company revealed that The Fruit Farm Group had requested the bankruptcy of AC Hartman, a supplier of exotic fruit to Greenyard as well as local European vegetables, and owned by the same shareholder as Greenyard.

“Greenyard regrets this unfortunate news given the long-standing relationship with AC Hartman,' the company stated.

“Greenyard is not related to ACHartman nor to The Fruit Farm Group as it is a separately managed group, both operationally and financially. As Greenyard has alternatives for the products concerned, it is not expecting this event to have negative consequences for its customers. Greenyard’s positive recovery will also not be affected by this event.”

Greenyard has battled to recover in the past year following a €113m loss in first half of 2018, after bad weather hit operations.

In March the company announced it could shed up to 422 jobs across its operations as part of drastic transformation plans.

In October it divested its UK flower business, selling it to Yellow Holdings, having sold its horticulture business to Straco investment fund for €120m in 2018.

The company saw more positive results recently, however, announcing that it’s half-year EBITDA had been upwardly revised to €47.5m.