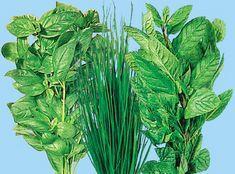 After many years of riding the wave of a celebrity chef-driven revival in home cooking, the herb sector has had to face up to a whole new set of challenges in 2012.

The simultaneous blows of the recession dampening consumer spend combined with the weather hitting production has ground sales growth to a standstill. The market is currently worth £95.6 million [Nielsen, 52 w/e 23 June 2012], with coriander presently holding a 26 per cent share of sales, ahead of basil (18 per cent) and flat leaf parsley (12 per cent).

Jackie Harris, technical manager at Lincolnshire Herbs, describes this year’s weather as a “disaster” for the British market, with shortages of product and quality on coriander looking particularly poor, while Fiona Lamotte, MD of Scotherbs and chair of the British Herb Trade Association, adds that consumers are not indulging themselves as much as before. “Volumes are steadying off due to the economic situation,” she explains. “People are cutting back on their spend and it’s much more of a steady sales picture now.”

To compound the difficulties, the industry has struggled to come up with the cash for a PR campaign this year, though Lamotte is confident one will be put together in 2013. “We would like a marketing campaign,” she says. “But there’s been lots of consolidation in the industry, we don’t have as many members and it’s hard to raise the cash. Some companies are doing their own thing, and lots of retailers have been doing articles in their own magazines, but it would be nice to look at doing an integrated EU campaign as well.”

Discussions on accessing EU funding are expected to take place shortly, and Lamotte holds up the promotional work of the Mushroom Bureau and British Leafy Salads Association as examples of organisations that have successfully claimed European money.

One company that has managed to get a concerted PR push together is market leader VHB/The Fresh Herb Company, which launched its 5 Ways with Fresh Living Herbs campaign. “We believe it’s important to help inspire people to use fresh herbs,” says Ann Tenison, marketing manager at The Fresh Herb Company. “A lot of cookery books and recipes call for the use of fresh herbs, but we want our consumers to feel confident and empowered to experiment with using fresh herbs in everyday meals, not just for specific recipes or special occasions. Our consumer campaign aims to highlight the everyday ways in which fresh herbs can be used and how to care for your herbs at home to get maximum value.”

Scotherbs is trying to boost interest among the next generation by working with schools, as well as doing tastings and appearing at shows, while VHB has also developed a new range of fresh herbs in partnership with Madestein UK, called Fresher for Longer. Describing the range as “the first of its kind for a UK supermarket”, the ‘roots-on’ selection is said to offer consumers maximum freshness and convenience.

From a technical point of view, work is underway to trial more weather-resistant types of herbs to prevent the problems of this season, while Stockbridge Technology Centre has been experimenting with LED lights with a view to lengthening the season and reducing imports.

It’s not an easy market, but the optimism is still there that this season is just a blip. As if to emphasise the point, Elsoms is ramping up its focus on herbs by hosting a BHTA technical meeting on 16 October.

All these moves suggest that while 2012 might not live long in the memory, there is plenty of reason to suggest this is still very much a market on the rise. -