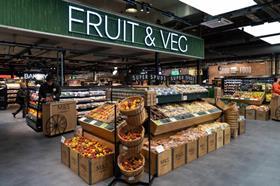 UK shoppers have crowned M&S the UK’s best in-store supermarket, according to a new Which? survey published on Friday (25 February).

But strong performances from discounters Aldi and Lidl also highlighted the importance of value for money for customers facing a cost of living crisis.

The Which? consumer champion’s annual satisfaction survey asked over 3,000 members of the public about their in-store shopping experience at the nation’s biggest supermarkets, looking at a range of factors including store appearance, product range and value for money.

M&S, the highest-scoring in-store supermarket for 2022 with a 78 per cent customer score, received five stars for store appearance, customer service and the quality of its own brand and fresh products. One customer said: ‘I seriously love M&S, it’s part of my childhood …the food is the best you can get.’ Another added: ‘Just love it. Fantastic products. Great quality.’ However, M&S scored poorly in Which?’s supermarket sustainability ranking which was published last month.

Last year’s top scorer, Aldi, was only very narrowly pipped to the post, with a 77 per cent customer score, and was the only supermarket to get the full five stars for value for money – arguably the most important measure as living costs continue to soar. This was summed up by one shopper who told Which?: ‘You get more food for your money’. Others described it as ‘cheap and cheerful,’ but it was let down somewhat by long queues. Aldi was also the only in-store brand to earn a coveted Which? Recommended Provider endorsement.

Waitrose completed Which?’s top three with a 75 per cent customer score. Shoppers gave the supermarket full marks for the appearance of its stores, helpfulness of staff, short queues and the quality of its fresh produce; however, it suffered the same fate as M&S when it came to value for money. One customer said: ‘A nice place to browse. But it is a little more expensive and sometimes I don’t feel that it’s justified.’

Meanwhile, Co-op was deemed the worst in-store supermarket, languishing at the bottom of the ranking for the second year running with a 61 per cent customer score. Customers told Which? it was ‘expensive’, ‘always crowded’ and had ‘long queues at checkout’.

When it came to online supermarkets, Which? found it was Iceland that impressed customers the most. The frozen food specialist received a customer score of 76 per cent, getting five stars availability of delivery slots and how easy its website or app was to use. Shoppers expressed their gratitude, with one telling Which? ‘[Iceland was] lifesaving during the lockdowns as it was the only place with available delivery slots.’ Despite high praise from customers, Iceland came last in Which?’s sustainability ranking of the supermarkets last month.

Tesco proved itself a worthy competitor, finishing alongside Ocado (74%) as joint-second online supermarket in 2022. One online Tesco shopper told Which?: ‘[The] website is easy to navigate with a wide choice of food at good-value price points and delivery is always available.’

Online-only Ocado (74%) was the only supermarket to get the full five stars for its product range. One customer said its offering was ‘unique’. Another added: ‘They have a fantastic range of more unusual items which I like – vegan food, world food, healthy options, etc – as well as all the basics.’ Ocado was the only online supermarket to be awarded a Which? Recommended Provider badge.

Harry Rose, Which? magazine Editor, said: “Shoppers have chosen M&S as their favourite supermarket for a great in-store shopping experience and quality products.

“But with the cost of living continuing to rise, many people are looking for quality at the cheapest possible price, and this is reflected by a strong showing in our research for some of the least expensive supermarkets.”