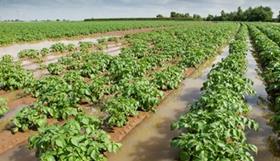 Farming organisations across the UK have called on the government to relax the three-crop rule as thousands of farmers across the country contend with flooding after Storm Dennis.

The UK Farming Roundtable, which met yesterday (18 February), called for the government to grant a derogation from the rule.

A crop diversification requirement under the Basic Payment Scheme, the rule means growers must have three crops in the ground on their farm between 1 May and 30 June.

The NFU also wants the government to broaden the extent of the Farming Recovery Fund to help flood-hit farmers with any uninsurable losses as a result of flooding.

A joint statement from members of the UK Farming Roundtable said: “There will be many farmers out there really struggling, not just with the immediate impacts of the current flood water but the knock-on effects of damage to farmland and buildings, as well as significant impacts to this season’s cropping.

“They will be looking to the government to be practical and we are urging them to grant a derogation from the three crop rule, which is completely unworkable for farmers across the country this year.”

The roundtable added: “We are facing an unprecedented situation. Relentless rain has meant some farmers won’t have been able to get on their land since the autumn.

“A significant area of farmland is currently underwater following two storms in two weeks, compounding the already wet ground conditions from this winter.