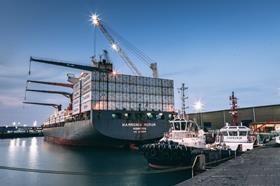 The Port of Portsmouth could have been forgiven for feeling down on its luck. Yet far from bemoaning the loss of a significant chunk of its throughput – when first the Cool Carriers’ Coolman and then the Geest specialised reefer services switched to rival Dover – the UK’s largest banana port is keen to emphasise new opportunities generated since the start of the year and the plans it has to transform its services.

Without doubt, losing upwards of 6,000 pallets per week of bananas and pineapples was a body blow. Ironically, the news coincided with the release of a report revealing reefer terminal handler MMD Services was on the path to solid profitability, having posted a net £200,000 in 2016/17. That was up from the £42,000 it made in 2015/16.

Losing the two banana services forced the port to make redundancies, but the collateral damage was limited after MMD secured a multi-million pound contract with wind turbine manufacturer MHI Vestas – a deal the port said was larger than the fruit-shipping agreement it had lost. The ten-year Vestas agreement will see MMD collect 80m turbine blades from a nearby painting facility ready for shipping.

Despite welcoming the lucrative project cargo, the new management team under recently appointed MMD board director Mike Sellers insists the fruit business will always remain core to the port. But it has had to adapt, and the shape of the business will clearly be different. The loss of two of three of the port’s breakbulk banana cargoes has been a catalyst for change: while the AEL service from West Africa on the Star C-Class vessels will continue to be accommodated, there has been a clear shift in focus towards the alternative mode. This is hardly surprising given that the transatlantic Maersk Line and Hamburg Süd services for Fyffes and Del Monte respectively, and the CMA CGM and Seago services for seasonal Moroccan citrus, are all containerised.

The change will also manifest itself in the imminent demolition of two ageing coldstorage sheds serving the 220m Albert Johnson Quay. These are no longer needed for so much below-deck, palletised fruit; there is enough capacity to store bananas, pineapples and citrus in the port’s new multi-chambered coldstore, which is located behind the adjacent, shorter Flathouse Quay.

In place of the sheds, at a cost of £3.8m, an extended apron area dedicated to the storage and movement of reefer containers will be created. The number of reefer plugs available to MMD here will almost double to 460. This will allow a vessel to offload containers onto the quayside instead of directly onto a skeletal trailer. So, instead of having to wait for a procession of skeletals to transport each box from vessel to container park one by one, as happens today, the vessel will be able to offload all the boxes onto the quay, re-load any empties and then sail away.

The port claims that the investment will save the vessel operators four to six hours of port dwell time, while the extra plugs will ensure the cold chain is not broken during the offloading operation. Additionally, the apron will be able to stock up to 200 empty containers for collection.

What’s more, the length restriction of the Albert Johnson berth means that even if the entrance channel to the terminal is dredged, there is still a limitation on the size of vessel that MMD will be able to handle. For as long as customers continue to charter reefer vessels, or carriers continue to deploy the 2,000 TEU Feedermax model for banana shipments, this will not be a problem.