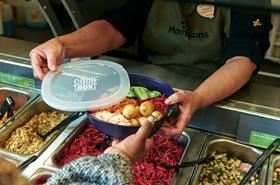 The Refill a Box scheme is described as the first of its kind to be trialled by a UK supermarket. Each ‘rentable’ box will replace Morrisons' large salad box and is made from fully recyclable polypropylene. The boxes are designed to be used 400 times to prevent disposable plastic containers from being used.

To use the new boxes, customers must first download the CauliBox app, register, tap on ‘scan to take a box’ and insert their card details. Customers can then scan the QR code on the Salad Bar point-of-sale, collect an empty box from a Salad Bar colleague, fill it with salad products, then pay at the till as normal.

Boxes should be returned to the Refill a Box drop-off point at the Salad Bar when customers next visit and the QR code scanned again. They will be thoroughly machine washed and sanitised, before being returned to the pick-up point for another use. A £5 deposit is held while customers use the box, which is refunded when the box is returned within seven days.

Lorraine Wheeler, environmental packaging manager at Morrisons, said: “Thousands of customers visit our Salad Bars every week - and this is increasing as people go back out to work. Until now we’ve stocked recyclable single-use plastic containers, but we think customers will be ready to swap to this reusable box - as it’s so simple to use. We hope to roll it out to more stores this year.”

Morrisons said the move to refillable boxes is its latest initiative to remove plastic packaging from its stores. It introduced a refillable container scheme for its customers at its butcher and fishmonger counters in 2018 and was the first supermarket to introduce paper carrier bags at checkouts in 2019. The retailer pointed out that it is also the only UK supermarket to own its own recycling plant in Fife, which reprocesses hard-to-recycle soft plastic.