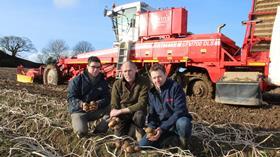 With ten percent of last year’s potato crop still in the ground in Northern Ireland, some farmers have attempted make to use of recent good weather to try and salvage them.

However, the sudden onslaught of Storm Ciara has knocked any chances of getting all the crop rescued this week into touch, according to growers.

The dry break in the unusual winter weather two weeks ago had given some potato farmers hope of saving the last of their crops before any inclement weather set in.

One of those farmers on a rescue mission is North Down grower Derek Erwin, who farms with his son Ethan.

Taking advantage of a few days of dry conditions the father and son team were attempting to harvest a crop of the Cultra variety, on the outskirts of Dundonald, which they first started into last October.

Their progress was short lived when Storm Ciara decided to howl. The family say harvesting has been put back for another ten days or two weeks to see if any dry weather can compensate for all the rain Ciara brought with her.

Derek Erwin said: “The potatoes should have been lifted before the end of October last. But the constant rain at that time made the completion of the harvest just impossible.

“The crop was planted out in perfect conditions during the second week of May. North Down is one of the driest parts of County Down.

“We have a rain gauge on the farm and annual rainfall levels for this part of the world usually come in at around 30 inches. For 2019 that figure increased to 45 inches. That’s 50 percent more rain than we would normally receive.

“The rain started in earnest around the second week of June. And it never stopped for long enough to allow us get on with the harvest at the back end,” he added.

Derek expects that the remainder of the crop in the fields yet to harvest will be down between 15 and 20 per cent.

He said: “This figure is made up by a combination of winter kills and potatoes that simply rotted in the wet conditions.

“However, those potatoes that are making the boxes are of surprisingly good quality. Skin finish is excellent and tuber size is very even.”

Stuart said: “Potato crops still in the ground have wintered surprisingly well. But it remains a race against time to get them harvested.

“Several nights of hard frost could do serious damage to these crops. And that remains a possibility, given that we are still at the beginning of February.”