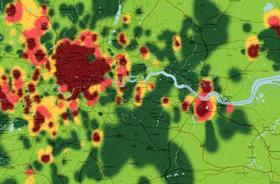 Heat map of London showing in red where stores are seeing declines in spend, and green where they are seeing growth

More than two-fifths of grocery stores are actually seeing a decline in sales volume as city centre outlets lose business to suburban rivals.

That's according to new figures from Nielsen, which show that 41 per cent of UK grocery stores are seeing declining sales volumes.

FMCG grocery sales growth overall currently averages around 8 per cent in the UK year to date, equivalent to an estimated £9 billion of incremental sales from January to November 2020, compared to last year. However, despite this significant growth, the highest revenue stores - known as ‘golden stores’ - that account for 80 per cent of UK FMCG sales have undergone a dramatic shift.

According to Nielsen, in 2019, 20 per cent of UK retail outlets accounted for 80 per cent of FMCG sales. However, in 2020, this has lowered to 19 per cent - a small shift that accounts for billions in consumer spend moving to different locations.

This is being driven by the ongoing travel and Covid-related restrictions, with the majority of losses seen in high-density city centre districts filled with offices, commuter hubs and tourist attractions, and stores in these locations have seen massive declines. This extreme is matched only by the unprecedented growth in stores around residential areas. With Londoners forced to work from home in huge numbers, sales at stores in these suburban areas have seen significant increases, with 9 per cent of all stores experiencing over 100 per cent growth in sales.

Scott McKenzie, global intelligence leader at Nielsen, said: “Covid-19 has forced us all to shop differently but this investigation demonstrates just how deep the changes in our habits are - and the need for retailers and manufacturers to respond quickly to the massive changes we’re now seeing in store dynamics.

“Companies around the world are already signaling they will no longer operate the way they did in the past. People will commute less, work from home more and move further away from urban settings. The consequences of this for the locations of stores, the formats of stores, and the assortment in those stores are far reaching. If you add in the dynamic of a massive rise in e-commerce for the FMCG space, the need to respond to these new shifts are critical.”