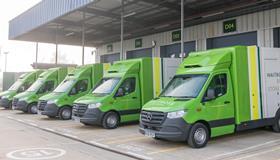 Waitrose.com has processed more than 150,000 online orders in a week for the first time, the retailer revealed.

Waitrose said the figure is more than double the amount of weeklyorders at the start of this year and represents a significant milestone in its online expansion plans.

It comes as the supermarket is in the process of adding 150 new delivery vans to its fleet, which it said will enable it to offer further increases in delivery slots to customers over the coming weeks. The new vans are described as quieter and more efficient thanprevious models, andoffer19 per cent more delivery capacity.

Since the beginning of the year Waitrose has been scaling up its online operation, increasing the amount of weekly slots it can offer to customers as well as covering more of the country. In February it announced that a further 24 shops would be made delivery shops between now and 1 September, when Waitrose.com becomes the only place shoppers can order Waitrose food online. Three of these 24 shops are due to go live with a delivery service this week.

Nearly 90 per cent of active UK postcodes can now order from Waitrose.com, the company added. There are 173 Waitroseshops that deliver Waitrose.com orders, and 26 of these are now delivering more than 1,000 orders each week.

Two Customer Fulfilment Centres in Coulsdon and Enfield support the additional demand in London, the latter of which opened on 7 May.

Despite the expansion, Waitrose said demand for online slots is still outstripping supply and it is continuing to prioritise vulnerable customers who need deliveries the most. The Waitrose Rapid service has recently trebled its deliveries to 7,000 per week, withat least40 per cent of the slots reserved for vulnerable customers. The service offers up to 25 products for delivery within two hours.

Waitrose.com director Ben Stimson said: 'The expansion plans we had in place for Waitrose.com have allowed us to respond as best we can to the huge surge in demand in recent months - especially from vulnerable groups who need home delivery services. We're seeing a fundamental shift to many people's shopping habits, and we're incredibly proud of how our shops have scaled up our online operations at such speed.'