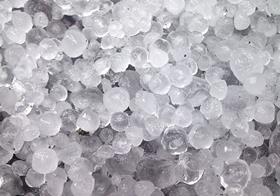 Grapes, stone fruit and nuts were among the crops affected, prompting federal member for Mayo, Rebekha Sharkie, to call on the government to help South Australian fruit growers finance netting for vulnerable crops.

“I have been advocating for a dollar-for-dollar scheme for netting orchards in my electorate because the science tells us severe storms are going to become the norm rather than the exception as farmers deal with the impact of climate change,” said Sharkie.

“After multiple seasons of devastation, many growers in my community do not possess the funds necessary to make the capital investment in netting as future insurance to protect their crops.”

Sharkie noted the netting costs are often prohibitive, adding: “Costs are about A$60,000 a hectare on average… and I believe a A$10m dollar-for-dollar scheme capped at around A$300,000 per SA producer would be a hand up rather than a hand out to our farmers.”

In an interview with ABC Riverland, pecan producer Dave de Grancy said the damage has ruined their upcoming season, “Our 2020 crop is going to be a zero,” he commented.

It’s reported the storm was localised within an area of approximately two kilometres wide, with hailstones up to the size of golf-balls falling for up to four minutes.