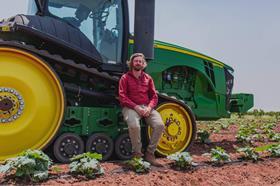 The Victorian Farmers Federation (VFF) has announced Nathan Free as the successful candidate for the role of horticulture president and Katherine Myers as horticulture vice-president.

“I congratulate Nathan and Katherine on their appointment and look forward to working with them to help progress the future of the Victorian horticulture industry,” said Lovell.

Before taking over the role, Free served four years as horticulture vice-president and is a former Nuffield Scholar and Rabobank Emerging Leader.

“I look forward to continuing to advocate for better seasonal workforce access, streamlining quality assurance programmes, advocating for greater biosecurity funding and helping to build a Victoria that values the great work our farmers do,” said Free.

Myers has been involved in the opposition to AusNet’s Western Victoria transmission network project that threatens potato farming around Ballarat.

“I look forward to engaging with horticulture farmers around the state to ensure that their land and farms are protected from the kind of issues I’ve been fighting locally,” said Myers.