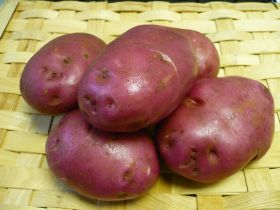 Red is the new white when it comes to potato varieties, if a leading Canadian breeding programme is anything to go by.

Red-skinned offerings accounted for more than half of the 15 new varieties unveiled by government body Agriculture and Agri-Food Canada (AAFC) at their annual release open house late last month.

Among the selections was a multi-purpose variety that shows promise for processing as wedges and as a traditional table potato, according to an AAFC release.

The new varieties were narrowed down from more than 100,000 hybrid seedlings that were grown, tested, and measured over six years in AAFC greenhouses, laboratories, and fields across the country.

AAFC’s Accelerated Release Programme has been active since 1998, with close to 200 selections released since its inception. As new varieties are developed, past potato strains are retired in favour of newer varieties.