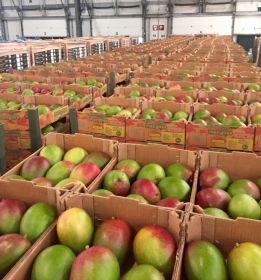 Peruvian mango exports to Asia are on course to reach approximately 1m tonnes in 2018, up from just 425 tonnes in 2013.

China, South Korea and Japan are the biggest markets, with smaller quantities going to countries like Singapore, Hong Kong among others.

Sobifruits sent around 15 tonnes of air-flown mangoes a week to Asia last season, in addition to carrying out a number of sea shipments to South Korea, which according to the company’s Nícolas Benavides, arrived in good condition.

“We also sent five shipments of pomegranates to Thailand for the first time, and expect to expand our programmes in both products next season,” he says.

Although Asia accounts for just 5 per cent of Peru’s total mango exports, Benavides says the market is growing year after year as a greater proportion of exports are shipped by sea.

“There are weekly services to South Korea with a transit time of 23-25 days, and with the use of controlled atmosphere technology we should have no problem reaching many other destinations in Asia in future campaigns,” he said.