Asia on brink of major changes 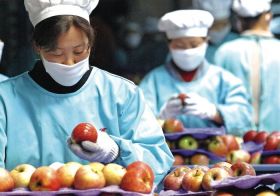 Hong Kong is often described as one of Asia's most international cities, so as we gear up for the Asiafruit Congress there, it's worthwhile glancing at what impact some of the major “global” issues of the day – from the credit crunch to rising food costs – are having on Asia's fresh produce business.

The global food “crisis” has been keenly felt across Asia, where soaring prices of staples like rice and wheat are driving inflation rates. Rising living standards in India and China are often cited as one of the key factors in upsetting the food supply/demand equation, and the produce trade has also begun to witness their power as consumer markets “kick in”. Over recent years, global fresh produce suppliers have been casting nervous glances towards China and India, anxious that these powerhouses of production would become marauding export giants, but the latest signs are that both countries will have their work cut out to meet internal demand for fruit and vegetables in the future.

While the rising cost of staple foods such as rice stands to affect spending on high-value fruits across Asia, recent trends reveal that many consumers are “trading up” in their produce purchases, as the rising sales of seedless versus seeded grapes bear testimony. Further evidence of more sophisticated consumer demands can be found in the nascent interest in organic produce across the region. Traditionally, 'organic' has barely registered on consumers' radars, and significant hurdles remain to market development. However, food safety concerns and health trends are spawning interest in the concept. The environment too could become more of a factor in people's purchasing decisions in the future, as events like the Beijing Olympics, branded by the local government as “a clean-air event”, raise awareness of the dire problems at stake.

As for the credit crunch, Asia has weathered the impact of soaring inflation to shrug off the worst effects of this global malaise to date, but surging fuel and energy prices pose a serious economic threat. Low energy and shipping costs have underpinned the growth of China and Asia's other export-based economies, so the recent price hikes, coupled with weakening global demand, could very easily undermine the region’s manufacturing models. When it comes to the fresh produce trade, rising transport costs may render more distant origins of imported fruits, such as Latin America, a less attractive option for Asian buyers, while making the increasingly affluent domestic market a more attractive option for producers in China and India.

Clearly, the Asian markets are on the cusp of some profound changes that challenge many of the “received” ideas about the region. And such rapid evolution is sure to generate much lively debate at the Asiafruit Congress in Hong Kong.