New Zealand is in for a record apple season with a forecast 19.5m cartons to be exported 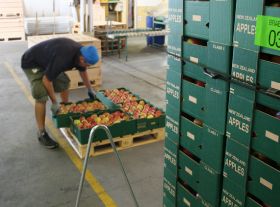 New Zealand’s apple exports are expected to reach 19.5m cartons in 2016, up 5.5 per cent on last year, according to industry body Pipfruit New Zealand.

"2016 is likely to be the third back-to-back record export season for apples, and firmly cements New Zealand’s apple industry’s number one ranking in the world for international competiveness,” Pipfruit New Zealand CEO Alan Pollard said. "We are now well on track to achieving our NZ$1bn export earnings goal earlier than our 2022 target.”

Across New Zealand, consolidation within the industry, improvements in quality and orchard design as well as investments in developing new club varieties were all factors leading to the increase in exports.

"Across the regions we are creating more jobs, training and career opportunities to support the growth in the pipfruit industry,” Pollard said. "We are seeing increased business for the horticultural service sector and greater economic activity and development in packhouses, cool storage, transport logistics and freight."