Lulu looks to invest in the Philippines 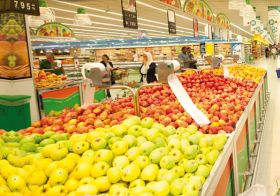 Middle Eastern supermarket chain store Lulu could be setting up in the Philippines, reports the Manila Times.

Representatives from the United Arab Emirates-based retailer visited the Philippines last week to explore opportunities to invest in the country, including potentially setting up a warehouse for food products.

The Philippine Economic Zone Authority (Peza) director general Charito Plaza said that Lulu would be exporting products from its base in the Philippines to markets in the Middle East and Asia.

“They will now be building in Malaysia, in Thailand, and then also in the Philippines,” Plaza said. “They will be putting up warehouses and will start looking at possible agricultural areas or agricultural economic zones where they can raise their vegetables and other crops and put up food processing industries to distribute in their different branches in different countries in the world.

“We are also assisting them in identifying possible agro-industrial ecozones where they will really have a plantation for all the food sources that they will process and deliver to the market,” Plaza added.

Lulu would also be looking to set up retail operations include shopping centres and supermarkets in the Philippines.