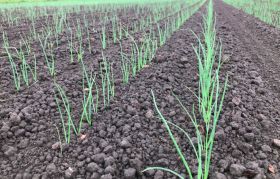 Investments in personnel and growing systems are underpinning Bostock New Zealand’s bid to become a leader in the organic onion export trade.

The Hawke’s Bay-based company’s owner, John Bostock, said demand for organic onions is huge across the globe, especially in Europe where there is a major supply gap before domestic production gets underway.

With a counter-seasonal production window to their European counterparts, Bostock New Zealand is well positioned to service this window of opportunity.

“The challenge for us is to make it economically viable to grow and export organic onions from New Zealand so our international customers have a year-round supply of higher valued, premium quality, GM free organic produce,” John Bostock explained.

To help aid this task, Bostock New Zealand has recruited Talis Bosma, a top student from an organic agricultural college in the Netherlands. Bosma is working alongside an experienced local team on a 2.7ha field trial of organic onions in Hastings.

Along with successfully growing organic onions, Bostock said knowledge gained through the field trial would be transferred to production of the company’s conventional crops.

“The biggest challenge when growing onions is weed and pest control, which is why conventional growing methods rely so heavily on a spray regime to make it economical to export in large volumes,” he explained. “We’re confident, through this trial, we will be able to reduce, if not eliminate, the high dependency sprays.”

Bostock New Zealand’s growing manager, Chris Zuiderwijk, said it was crucial to create a stale seedbed so onions could grow weed free, hence the company’s rececent investment in a weed flamer to burn off existing weeds. Zuiderwijk and his team have then cultivated the top layer of the paddock using a new finger tine weeder.

“We planted the onions on October 13 and then did another round of flame weeding just before the plants came through the soil,” Zuiderwijk said.

Bostock New Zealand has also taken advantage of a new wave of varietal development within the onion category, sourcing a disease resistant seed to combat onions’ susceptibility to Downy mildew.

“The crop’s growing well and we plan to harvest in late February. We are confident the trial will be successful and are committed to turning it into a full scale export production next season,” Zuiderwijk added.