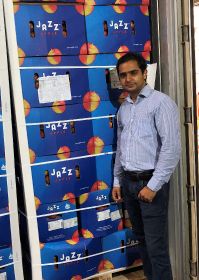 Jazz-branded apples have returned to the Indian market for the first time in six years, a sign that consumer demand for the premium fruit is apparently strengthening.

Grown in South Africa and Chile, the fruit is marketed by New Zealand company T&G Global in partnership with its Indian import partner Yupaa Fresh, which already imports Red Delicious, Royal Gala and Fuji apples supplied by the exporter.

Jazz was first tested on the Indian market back in 2012, when a small consignment reportedly found favour with consumers who said they enjoyed its refreshing flavour and crunchiness.

Simon Beck, T&G’s global commercial sales manager for apples and pears, said increasing demand for the premium variety in India demonstrated how the market was rapidly changing, mainly the result of a strengthening economy that has afforded consumers more disposable income.

“Yupaa were the first to import apples into India with T&G,” he recalled. “We have since increased and grown our business relations to the extent we now work with T&G’s global team in New Zealand, Australia, Chile, Peru and Europe.”

Karvat confirmed the incoming consignments of Jazz will be sold through Yupaa’s network of wholesalers, which extends to more than 52 cities and towns across India.

“Some of the select markets will be targeted specifically who have appreciated this variety in the past and who demand the size profile that we’re working with this season which is slightly smaller than average,” he added.

“We’ll also be sampling Jazz to wholesalers and retailers to enable them to confidentially promote it to their customers. Feedback so far about the arrival of Jazz has been very positive and we’re working with our old existing Jazz customers to re-develop the business. It’s an exciting time.”