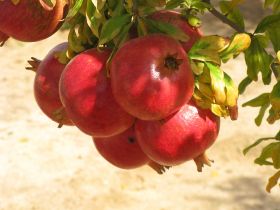 Well into Maharashtra’s pomegranate export season, a drought is looming across the state.

Between mid-September and mid-March export opportunities for the fruit to Europe are at their peak. However, president of All India Pomegranate Growers Federation, Prabhakar Chandane said prospects were dim amid drought conditions.

“As the drought progresses there are chances that growers might not be able to produce enough for both the domestic as well as international market,” he said.

The federation was hoping to export 10,000 tonnes of fruit to Europe this season, and around 70,000 tonnes to other markets.

Maharashtra grows over two thirds of India’s pomegranates, so the impact felt is great, and the federation is calling for grower compensation.

Aside from restricted supply, quality concerns remain a key hurdle for India’s fruit exports. The Indian Express reported that the EU has recently set a maximum residue level for phosphonic acid on pomegranate at 2mg, with the maximum level for grapes remaining at 75mg.

Chandane said he has asked the Agricultural and Processed Food Export Development Authority (Apeda) to take up the matter.

Outside of Europe, growers are keen to tap into the bourgeoning Chinese market, and Bangladesh, which has been a traditional market has recently imposed a 60 per cent import duty which Chandane is hoping to resolve soon.