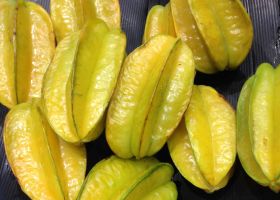 A new hybrid star fruit variety has been developed by the Malaysian Agricultural Research and Development Institute (Mardi). The variety, named Bintang Mas (or Golden Star) is angled toward the international market.

The Sun Daily reported Mardi had been researching the hybrid clone since 1986, and according to Malaysia’s agricultural minister, Datuk Salahuddin Ayub, it boasts the best qualities in terms of sweetness, crispness and colour, as well as higher yields and a shorter maturation period

“In addition, through mixed farming, we can also propagate stingless bee honey (madu kelulut) on the star fruit farm,” he said.

Johor is the main producing region for star fruit in Malaysia and the country currently exports to markets across Europe including the Netherlands, France, Switzerland and Canada; and Singapore and Hong Kong within Asia.

Salahuddin said in 2017 there were 828ha of star fruit plantations, with Johor making up 372ha of the total.